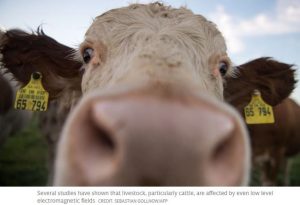 A group of French cattle farmers is suing the state over the mysterious death of hundreds of cows, which they believe are the victims of harmful electromagnetic fields.

Local vets are at a loss to explain the deaths.

Stéphane Le Béchec, 51, a Breton farmer in Allneuc, has lost 200 cows who died of unknown causes in the past three years and is closing his business.

He has identified several potentially harmful sources, including a transformer, mobile transmission towers and wind farms whose electric currents he says blight his land. “I noted that the voltmetre reacted strongly when I stuck it in the ground or in water,” he told Le Parisien.`

He has filed a legal complaint against “persons unknown” with the local prosecutor.

Patrick Le Néchet, another farmer in nearby Prénessaye, has lost 120 cows in similarly mysterious circumstances in the past five years.

“This week, he found a dead calf by its mother. Sometimes we find three in one go. We never know what we’ll find,” he said.

“We also have had blind calves with holes in their heads and deformed limbs that end up going round in circles and banging their heads on the walls,” he added. Others can no longer walk or refuse to be milked and produce very little, as well as bullocks that are stunted.