Glastonbury Festival-goers are revelling in an EMF minefield & the Evidence

Last weekend, a group of us drove around the site of Glastonbury Festival in Pilton, Somerset. We had an electromagnetic field radiation detector that was continually bleeping alarmingly and flashing red, indicating that the EMFs it was detecting were way above World Health Organisation recommended safety levels. They were penetrating on to the main road which runs past the site, and there were several hotspots in the quaint little village of Pilton itself, including the village hall and the Working Men’s Club.

A couple of weeks before, I had attended a meeting of Pilton’s parish council. It was standing room only as residents packed in to express their dismay about a telecommunications mast that had been erected, without any consultation with them, in the children’s skate-board park. Engineers had informed one of them that it was going to be made “5G ready” at the end of May, in time for the music festival. 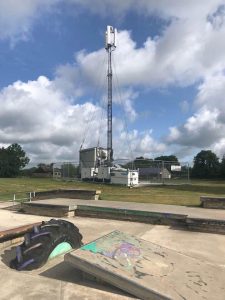 We are now beginning to receive reports from inside the site of dangerously high levels of EMFs from Simo Zia who is broadcasting videos from the Glastonbury site, plus people going to the medical tents with bad headaches, nose bleeds, stinging eyes and digestive issues – all classic symptoms of EMF radiation poisoning.

5G technology was installed at Glastonbury Festival this year by EE as part of a governmental agenda called 5G Rural First. This is a promotional push dreamed up by urbanite marketeers that purports to be about giving better internet access to country dwellers. In reality, though, good folks have paid £250 a ticket to be used as guinea-pigs in a 1.4 square mile test bed for an untested technology that could have serious implications for their health.

Partners of 5G Rural First include US telecommunications giant Cisco, Microsoft, the BBC and British Telecom, the owners of EE who are bringing 5G to Glastonbury Festival. 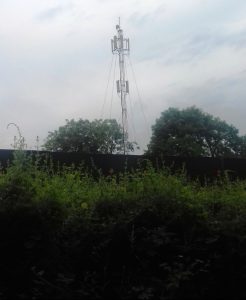 5G Rural First also has testbeds on the Orkney Islands and Shropshire and it claims its technology will help dairy cows perform better.

But they are ignoring the evidence of 230 scientists and doctors who are appealing to the World Health Organisation to move the 5G wireless signal from a Group 2B carcinogen to a Group 1, the same as asbestos and arsenic.

They believe that the dangers to health from 5G include increased cancer risk, cellular stress, harmful free radicals, genetic damages, structural and functional changes to the reproductive system, learning and memory deficits, neurological disorders, and negative impacts on general well-being. And the damage goes well beyond the human race; there is growing evidence of harmful effects to plants, insects and animals. 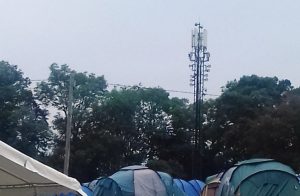 So where are the protests to halt this threat to our health and wellbeing?

Well, we cannot turn to Extinction Rebellion for help. Last month’s state-organised protests by their “actorvists” against climate change, which brought central London to a standstill, were to provide “hearts-and-minds” support for the zero-carbon-by-2050 promises made by Theresa May in the dying days of her premiership that, unwittingly or not, will bankrupt the country over 30 years.

One of Extinction Rebellion’s founder directors, Gail Bradbrook, went on to head up Citizen’s Online as a “digital inclusion strategy specialist consulting with a wide range of clients such as EE, London Connects and the Cabinet Office.”  There is also a former head of Exxon Mobil on its board as well as Lord Anthony Tudor St. John, a senior consultant to Merrill-Lynch and legal counsel to Shell. Shell is heavily invested in the satellite and aerospace industries which will be involved in the roll-out of 5G.

So what about the Greens? Surely they will be concerned about a new technology that will require the culling of thousands of trees, to successfully transmit its signals? Well, Caroline Lucas and Co were very late to the party. As recently as September last year, she was supporting the “smart agenda”, although the Greens are now talking about conducting a moratorium while the safety risks are assessed.

Glastonbury Town Council, made up largely of Greens, has also been foot-dragging on the issue. It is only now making efforts to catch up with the local grassroots anti-5G movement which had been vigorously trying to draw their attention to the problem for months. However, it is too little, too late. One of the worse EMF hotspots we found on Sunday was when we drove past the entrance to the Chalice Well Gardens at the bottom of Coursing Batch, just before the town.

Glastonbury Town Council is not responsible for the festival site at Pilton, which is in its own parish, and that is why so many of us attended their parish council meeting a few weeks ago. However, it has made no difference.

Michael Eavis, the festival’s farmer founder whose daughter Emily now heads up the four-day event, was leafleted by a local campaigner in Tesco’s the other day.

She said he got annoyed with her and replied:

“Young people are the cause. I bet you have a phone.”

In response, she pulled out of her bag a decidedly unsmart, out-of-date Nokia that, she informed him, was only used for emergencies.

Eavis then told her that he didn’t own a mobile phone. Make of that what you will.

Since then, we’ve received reports that some people are experiencing classic symptoms associated with 5G radiation such as bad headaches, nose bleeds and stinging eyes.

On top of that, Simo Zia has been making a series of videos to show how high the voltage is on the site and found that it is 1,000 times higher than the natural voltage of the human body. Simo had his account wiped off  Facebook for reporting the truth about 5G that the telecommunications industry doesn’t want us to know about, but so far his videos have managed to survive on You Tube, and so here they are: