Revealed: 5G rollout is being stalled by rows over lampposts 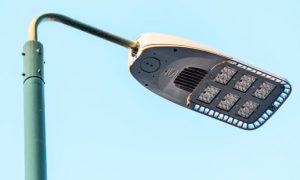 The rollout of the 5G telecommunications network is being stalled by at least two years over legal wrangling about the control of millions of lampposts, the Guardian can reveal.

Lampposts have suddenly become hot property because 5G requires the installation of transmitters on a dense network of masts taller than a double-decker bus. As a result, mobile network operators (MNOs) are clamouring for access to lampposts and other tall structures in cities, and are threatening legal action to any local authorities or landlords who stand in their way.

Experts say the sheer volume of local disputes is jeopardising the government’s pledge to get 15m premises connected to 5G by 2025.

A new electronics communications code designed to ease the rollout has backfired, according to Theo Blackwell, London’s chief digital officer. He said the code’s ambiguous wording on the issue of access to street furniture and lack of accompanying guidance had encouraged expensive and lengthy litigation.

Blackwell said: “Whilst the intention of the code was to make it easier and cheaper for MNOs to roll out infrastructure, by not providing guidance nor seeking compromise, the government have in fact delayed deployments by two years, whilst the new code is being tested in the courts.”

A new tribunal system designed to speed up disputes is already backlogged with dozens of cases. Dates for hearings in new disputes are not available until next year at the earliest.

Alicia Foo, a property lawyer and partner at Pinsent Masons who represents both operators and landowners, said: “More and more cases are clogging up the tribunals than ever was the case under the old code.”

One case has already been referred to the court of appeal and more are likely, Foo said. “Our court system takes a long time so a two-year delay is not inconceivable,” she warned.

She said disputes focussed on how much rent councils and other landlords can charge mobile operators for mounting 5G transmitters on lampposts and other tall structures. Cash-strapped councils claim revenue from the mobile providers could help them roll out 5G and other innovations such as using lampposts for electronic car charging points, security cameras and air quality sensors.

Foo said: “Everyone thought the new code was going to be this brave new world of faster connectivity, but on the question of money it has become very polarised between landowners and operators. I wonder whether the government was taken aback by the sheer number of operators who just want to have a go.”

She added: “I’m a litigator but I don’t think the answer is litigation because tribunals only decide very narrow issues put before them, not broad principles. The government could be more helpful in terms of guidance.”