Protestors come out in force against 5G 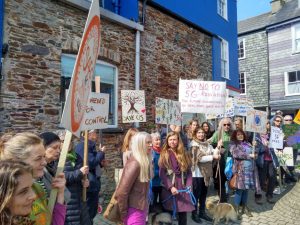 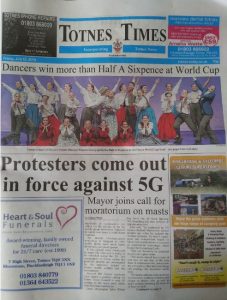 Hundreds of campaigners are calling for the roll-out of the 5G mobile network in Totnes to be halted over fears it could harm residents. The mobile communication techology is designed to offer mobile phone users much faster download ad upload speeds. It has already been introduced in major UK cities and is likely to be extended across the UK. But campaigners in Totnes reckon the potential benefits are outweighed by the unknown impact on human health, wildlife and the environment.

Around 800 Totnes residents have signed a petition calling for Totnes Town Council to stop 5G coming to the town until safety tests have been carried out. Local campaigner JOHN KITSON has been one of those fighting 5G, launchinghis own website at 5gawareness.com.

John said “As confirmed by US senator Richard Blumenthal several months ago when he quizzed the wireless industry, 5G hasn’t undergone any independent health or safety tests and therefore is classified as experimental technology, which breaks the Nuremburg code. This can therefore be classified as a human rights crime. The town council has a duty of care and we ask that, at the very least, it commences the precautionary principle so that this technology can undergo the necessary safety tests. 5G means millions more antennas in items from washing machines and fridges to electric cars, as well as space satellites beaming 5G down to us here on earth. It also means densification – more 2G, 3G, and 4G as well as antennas on our newly installed LED streetlights emitting dangerous levels of microwave radiation very close to our homes. Some of the illnesses linked to microwave radiation include cancer, infertility, neurological diseases, heart disease, immunity-related illnesses, damage to DNA and blood cells and much more.”

A petition against 5G signed by more than 235 scientists and doctors across the world warns that the network will “massively increase” people’s exposure to mobile phone radiation. Now scientists and doctors from 36 countries have called for a moratorium on the roll-out of 5G for telecommunications until potential hazards to human health and environment have been investigated by indepedent scientists. The cities of Geneva, Florence and Brussels have all stopped their 5G roll-outs amid concerns it could lead to people being exposed to an increased risk of cancer. Glastonbury has also opposed its introduction until further information has been obtained on the health effects.

Totnes resident Sue Webster, who said she suffers from electrosensitivity, fears that the introduction of 5G in Totnes, will cause her health and that of others, to suffer. She said “If 5G comes to Totnes, the mobile phone companies can construct antennas on lamposts outide approximately every 10th house.”

Totnes mayor Jacqi Hodgson agrees that Totnes should follow the Glastonbury moratorium on 5G masts until they are proved safe. She believes it is undemocratic for private mobile phone companies to be allowed to install mobile phone masts “pretty well where they like”, and without monitoring their emissions regularly. She said “It’s my understanding the installations of 5G mobile phone masts will be of a much higher level of emissions than the current 2,3 and 4G, and are therefore potentially more dangerous. There seems to have been very little investigation into the potential impacts of their higher non-ionising radiation or any suggestion of monitoring these emissions when they’ve been installed.”