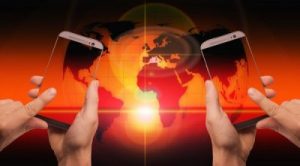 The New York Times continues to descend further into spewing fiction masquerading as news. Its most recent analysis challenges Judith Miller‘s delusional screed about Iraq’s weapons of mass destruction as sheer nonsense. Evidently the Times has a propensity for disgracing itself. Now the newspaper’s latest low is William Broad’s essay, “Your 5G Phone Won’t Hurt You But Russia Wants You to Think Otherwise,” touting a wild conspiracy theory that 5G technology’s severe risks to human health and the environment is a covert Russian plot intended to sow confusion into the minds of the American public.

As a patriotic loyalist of Russo-paranoia, Broad has dreamed up a hallucination that Russia is preparing to outpace the US’s strategy to dominate the global “internet of everything” in the race to launch 5G technology globally. Aside from Broad’s otherwise corporate friendly stances supporting hydrofracking, genetically modified foods, and the myth that vaccines do not contribute to neurological disorders, he has produced some excellent work about Yoga culture and North Korea. Yet these are hardly topics that would enable a person to speak intelligently about electromagnetic frequency’s (EMFs) biomolecular effects on living organisms.

Seen in its context, the Time’s article was timely. It was published just days before the National Day of Action to Halt 5G on May 15th.  The event was launched by Americans for Responsible Technology and has earned the support of nearly one hundred organizations including the Environmental Health Trust, the EMF Safety Network, Parents for Safe Technology, Wireless Radiation Education and Defense, among others.  Since the telecom industry and FCC have no viable science to support their claims, through the mouthpiece of the Times it has found a voice to further fuel the nation’s Russia mania.