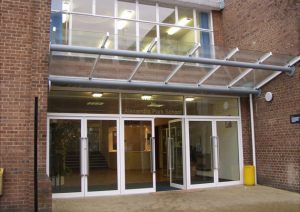 Plans to build a 5G mobile phone mast on top of a Muswell Hill secondary school have been thrown out amid concerns that parents had not been informed.

All three Lib Dem councillors for Alexandra have now called on neighbours to get in touch with their views ahead of a potential appeal.

Network operators EE and Three had applied for planning permission through their joint subsidiary, MNBL, to replace the mast on top of Alexandra Park School in April. Haringey Council rejected the plans on aesthetic grounds on June 5.

Cllr Allessandra Rossetti said: “Councillors were contacted by concerned parents on the last day of the consultation period.

“I am aware that the application mentions pre-consultation with local councillors and their lack of objections, but before last Friday we hadn’t received any communication from the applicant, either via email or post.

“Parents we have been in touch with told us they were not aware of the application either.”

Cllrs Josh Dixon and Nick da Costa also told the Ham&High they had not received a letter and it is understood that MNBL’s correspondence to nearby Rhodes Avenue Primary School was also not received.

In its submission, the company stated: “Mobile networks are ubiquitous throughout the UK. It is an expectation that an individual can connect whenever and wherever they so require.

“As this is an existing base station and the amendments are minor in nature, this is the most preferable site. As such no other options have been considered.”

It included a certificate from the International Commission on Non-Ionising Radiation (ICNIRP), stating the plans met EU limits on public exposure to electromagnetic fields – which were agreed in 1999.

An attached piece of promotional material stated: “It is imperative the UK prepares itself to enable this new technology and lessen the burden of over-complex regulations.”

5G – billed as the “next generation” of mobile coverage – operates at a much higher frequency than its predecessors, and is currently being trialled in cities across the UK.

In March the government wrote to the chief executives of all councils in England, advising that it wanted the UK to be a “world leader” in 5G and asking them to put policies and procedures in place to “minimise barriers to deployment”.

Earlier this year the ICNIRP announced plans to relax the safety regulations on phone mast emissions ahead of the rollout of 5G, on the basis that doing so would not pose a risk to public health.