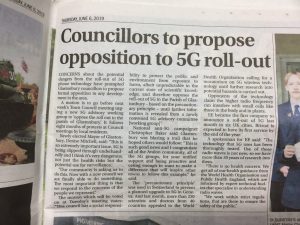 Concerns about the potential dangers from the roll-out of 5G phone technology have prompted Glastonbury councillors to propose formal opposition to any development in the area.

A motion is to go before next week’s town council meeting urging a new 5G advisory  working group to ‘oppose the roll out in the parish of ‘Glastonbury’. It follows eight months of protests at Council meetings by local residents.

Newly elected Mayor of Glastonbury, Denise Mitchell, said “This is an extremely important issue. 5G is being slipped through underhandedly and I think it’s very dangerous, not just the health risks but the potential use for surveillance.

“Our community is asking us to do this. Now with a new council we are finally able to do something. The most important thing is that we respond to the concerns of the people we represent.”

The motion which will be voted on at Tuesday’s meeting states:

“This council has a social responsibility to protect the public and environment from exposure to harm, albeit unpredictable in the current state of scientific knowledge, and therefore opposes the roll-out of 5G in the Parish of Glastonbury – based on the precautionary principle – until further information is revealed frok a newly convened 5G advisory committee [working group].”

National anti-5G campaigner Christopher Baker said Glastonbury was blazing a trail that he hoped others would follow: “This is such good news and I congratulate all of the Avalon community, all of the 5G groups, for your unified support and being proactive and caring enough to want to make a difference that will inspire other towns to follow this example.” he said.

The ‘precautionary principle’ was used in Switzerland to prevent a planned upgrade to 5G in Geneva. And last month, more than 230 scientists and doctors from 40 countries appealed to the World Health Organisation calling for a moratorium on 5G wireless technology until further research into potential hazards is carried out.

Opponents of the technology claim the higher radio frequency can interfere with small cells like those in the body and in plants.

EE became the first company to announce a roll-out of 5G last month in six UK cities. Bristol is expected to have its first service by the end of the year.

A spokesman for EE said “The technology that 5G uses has been thoroughly tested. Use of these radio waves is not new, so we have more than 30 years of research into them.

“There is no health concern. We get all of our health guidance from the World Health Organisation and Public Health England, which we informed by expert technical bodies that specialise in understanding radio waves. We work within strict regulations, that are there to ensure the safety of the public”.