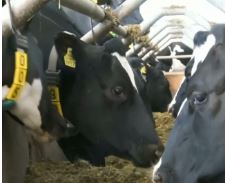 SHEPTON MALLET, England (Reuters) – They may look like regular cows, but a herd of Friesian dairy cattle at a British farm are internet pioneers and they are enjoying the benefits of 5G connectivity before you.

Cisco Systems Inc, which is developing network infrastructure for the emerging technology, has set up 5G testbeds to trial wireless and mobile connectivity in three rural locations.

5G promises super-fast connections, which evangelists say will transform the way we live our lives, enabling everything from self-driving cars to augmented-reality glasses and downloading a feature-length film to your phone in seconds.

While it is being used in pockets of pilot studies around the world, the first near-nationwide coverage is not expected in countries such as China, Japan or the United States until 2023, according to industry analysts.

For the cows, among the 5G-connected gadgets they are wearing is a collar that controls a robotic milking system.

When the cow feels ready to be milked it will approach machine gates that will automatically open. The device recognizes the individual to precisely latch on to its teats for milking, while the cow munches on a food reward.

At the government-funded Agricultural Engineering Precision Innovation Centre (Agri-EPI Centre) in Shepton Mallet, in southwest England, around 50 of the 180-strong herd is fitted with the 5G smart collars and health-monitoring ear tags.
Read more: https://www.reuters.com/article/us-telecoms-5g-cows-idUSKCN1RN1IY