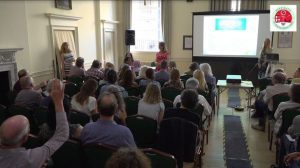 A medical doctor and researcher branded 5G technology “unsafe” when she spoke at a recent event in Bath.

Dr Erica Mallery-Blythe claimed existing guidelines from Public Health England on the safety of wireless technology are out of date and based on inaccurate reports.

She said: “Pre-existing radio-frequency technology has not been demonstrated to be safe, quite the opposite.

“We have thousands of papers showing biological effects even at well below current safety standards.

“Local councils have not been given the correct information by health advisory groups like Public Health England.”

Dr Mallery-Blythe’s talk was followed by a debate, where many residents voiced their concerns, particularly about the lack of public consultation on 5G.

Some members of the audience were from Frome and Glastonbury, whose local councils recently voted to stop 5G on public health grounds.

The Bath event, organised by the Stop 5G – Bath group, was held at the Guildhall on Friday, July 5.

Ms Hobhouse agreed to raise the issue in Parliament, while Councillor Romero pledged to find out all she could about the proposed roll out of 5G in Bath and North East Somerset and to listen to the concerns of local people.

Dr Mallery-Blythe is a trained medical doctor with a decade of experience within hospital medicine and an expertise in emergency trauma medicine.

In 2008, she began researching biological effects of non-ionising radiation – she formally transitioned from clinical medicine to full time research in 2015.