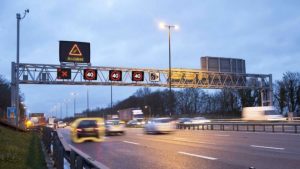 Hundreds of millions of pounds are being spent to make large stretches of the UK’s busiest motorways “smart” – but how do they work?

With about 400 miles of road already converted, and plenty more in the pipeline, many drivers will soon have used one.

What makes them “smart” are the computers constantly monitoring the road, which can change the speed limit on their own.

But this technology does not always run smoothly.

On 20 June, a stretch of smart motorway between Leicester and Nottingham was supposed to reopen at 05:00 BST following roadworks.

However, a “glitch” left three lanes of the M1 closed for no reason, causing several miles of traffic tailbacks because the computer would not reopen the roads when told to.

Highways England described this as an “extremely rare” event. But just how much control do computers have over the new roads, and how do they know what to do?

How do smart motorways work?

There are two main types of sensors computers use to keep an eye on the traffic, Matt Pates, who is in charge of the East Midlands for the authority, explained.

One is a set of copper loops buried in the road surface every few hundred metres.

When something metal, such as a car, passes over, it creates an electric current. This means a computer can tell how often and how quickly vehicles are passing over a certain spot.

It also knows the length and therefore roughly what kind of vehicles are passing by. It is the same technology used at some traffic lights to tell when there is a vehicle waiting.