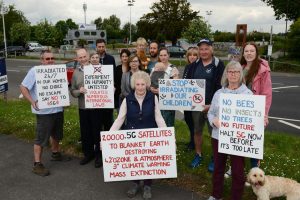 The new 5G network, which is being rolled across 16 UK cities this year, could transmit data at speeds faster than 10 gigabits per second.

To achieve this, the network aims to use higher radio frequencies that are less cluttered and capable of carrying more information at a faster rate.

5G differs from current wireless communications in that it will use multiple input and multiple output antennae to boost signals and capacity.

These will also rely on lots of smaller transmitters stationed on buildings and street furniture, such as lampposts, rather than singular stand-alone masts.

A group of scientists claim the radiation may increase risks of cancer, cellular stress, harmful free radicals, genetic damage as well as learning and mental health disorders in people.

Local resident Lynn Long says she wants to speak to councillors from the new administration about the possible implications of 5G rollout in Herefordshire.

“Not a single study to look into possible harm to health and the impact on our environment or the fragile space which protects our planet,” she said.

“The Federal Communications Commission in the USA have openly announced their intention to roll out 5G globally without prior testing and are blocking any attempts to challenge them on health grounds.

“The ground-based antennae will be on average, just 150 meters apart on lampposts, telegraph poles, buildings including schools and hospitals and right outside your bedroom window 24 hours a day, seven days a week.

“Unlike current 2G, 3G and 4G technology which transmit single antenna broadcasts over a wide area, 5G base stations and all 5G devices will have multiple antennas arranged in phased arrays that work together to emit focused laser like beams that track each other.